Monumental bronze figures gracefully adorn the surroundings of the Museum of Antioquia is one of the most iconic and traditional places in Medellín: Berrío Park, home to the only outdoor place in the world that has 23 sculptures by Maestro Fernando Botero, which were donated in 2002 to the city and would become the perfect excuse to inaugurate the Sculpture Square, or as everyone knows it in Medellín, the Botero Square. There, the bronze sculptures are a living expression of the sensuality that the master Botero wants to express with his work through volume.

Visiting the Museum of Antioquia is also an obligatory step in your visit to Medellín, which in addition to the more than 100 works by the master Botero, also houses 17 permanent exhibition rooms of pre-Hispanic, republican, and contemporary art. 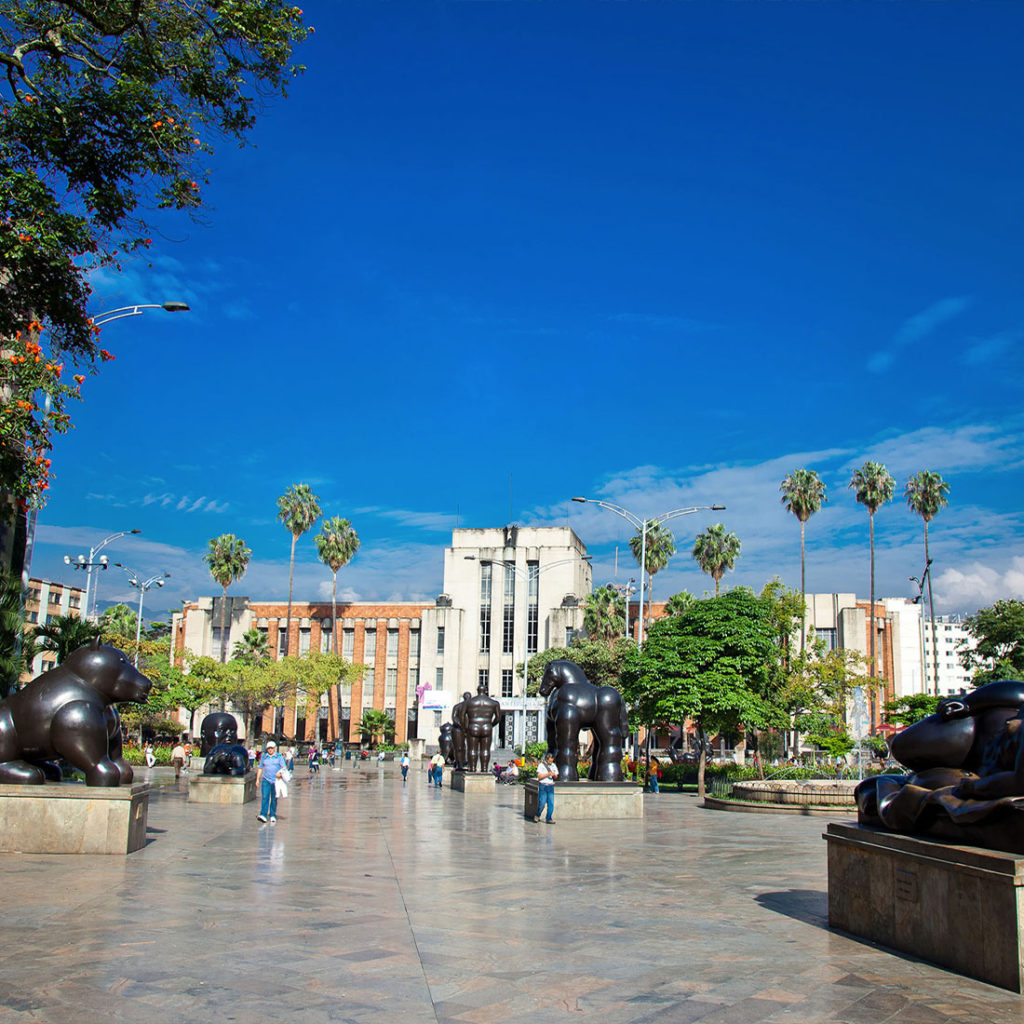 Where is it and how to get to Botero Square?

Botero Square is located in the heart of the city on Avenida Carabobo in Plazuela Nutibara.

Get to Plaza Botero by Metro

Plaza Botero is a few meters from the Parque Berrío station on Line A of the Medellín Metro, in the heart of the city, and is the closest station in a north-south direction to the San Antonio station, one of the busiest in be the station that connects with Line B.

Get off at Parque Berrio station and during the three-minute walk north to Botero Square, take a breath for all the ¨wow¨ that the traditional plaza will bring out.

Arrive by taxi to Botero Square

The distance from the City Center to Plaza Botero depends a lot on where you are, however, most of the trips from there can be done on foot or using some of the stations near the Metro.

“My way of thinking is reflected in my work, which has great respect for tradition. At the same time, it is a modern and contemporary expression of painting#

Fernando Botero is a Colombian painter, draftsman, and sculptor, born in Medellín on April 19, 1932. Botero is one of the most recognized visual artists in Colombia in recent decades. His vast work, currently fully consolidated, his deliberate dislike for contemporary art and his extensive knowledge of the history of classical painting make Botero an exceptional artist in the country and the rest of Latin America. His paintings and drawings are highly personal works that in no way can be confused with the various international figurative positions of recent years. His art is, to some extent, retrograde and provincial. It depends more on the art of the great masters, on popular art, on the pre-Columbian tradition, on the imagery of the colonial period of Latin America than on any figurative “ism”.

Botero stated in 1967: “I am a protest against modern painting and, nevertheless, I use what is hidden behind its back: the ironic game with everything that is absolutely known to all. I paint figurative and realistic, but not in the sense of flat of fidelity to nature. I never give a brushstroke that does not describe something real: a mouth, a hill, a pitcher, a tree. But the one I describe is a reality found by me. It could be formulated this way: I describe in a realistic way an unrealistic reality. “Tracy Atkinson, one of several foreign critics who has referred to his work, has written:” “Botero’s world is people in a broad sense. A repertoire that is generally absurd and a bit pathetic. But the warmth and sympathy of its treatment saves it from its ugliness and makes it instantly unforgettable. The artist’s attitude is so intense and consistent that it reaches into all things.